Excursion from Fez to Chefchaouen.

Head north, deep into the Rif Mountains, where the Earth meets the heavens, to explore the enchanting sky blue city of Chefchaouen. 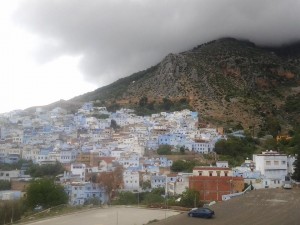 Following an early morning pick up at your hotel in Fez, we will have a 2.5-3 hour drive up into the Rif Mountains, direct to Chefchaouen.

Among the major sights in Chefchaouen are the Kasabah (fortress), the Ras El Maa river valley, and the hillside Spanish Mosque (a 30 minute hike from town).

Chefchaouen can be explored with or without a guide.

Once completing your visit, we will drive back to Fez and drop you off at your accommodations.