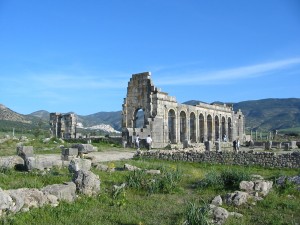 Discover two UNESCO sights in one day: the unearthed Roman city at Volubilis and the Imperial City of Meknes.

Our first stop will be the ruined Roman city of Volubilis.

French archeologists began excavating Volubilis in the early 20th century, though half of the immense sight still remains beneath centuries of topsoil.

Marvel at the famous sights, like the basilica, the triumphal arc, and the many palaces with their exquisite mosaics. The tour of Volubilis can be done either with or without a local guide.

Next we will make a quick stop in the adjacent small town of Moulay Idriss Zerhoun.

Perched atop a hill overlooking Volubilis, Moulay Idriss Zerhoun houses the mausoleum of Moulay Idriss I (745-791), the first Arab king of Morocco. 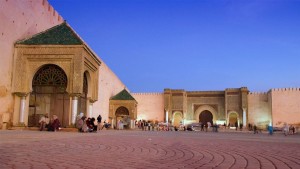 We will also visit Moulay Ismail’s mausoleum (one of the only mosques in Morocco open to tourists), the monumental Mansour Gate, the covered food market, and the El Hidem Square.

Once finished with this busy day of sightseeing, we will take the highway back to Fez.

We will drop you off at your hotel in the late afternoon/evening.

Meknes to the Middle Atlas towns

Meknes – Middle Atlas towns (Imouzer, Ifrane, Azrou) – Meknes Escape the hustle and bustle of Meknes with an excursion into the natural and small-town calm of rural Morocco in[ *** ]