Day 1 : Drive from Marrakesh to Ouarzazate

Driving higher and higher, we will encounter the numerous winding switchbacks of the Tizi n’Tichka mountain pass, a marvel of modern engineering and design.

At 2,260m above sea level, we will stop at the crest of the Tizi n’Tichka to gaze at the surrounding mountaintops.

Going down the other side of the High Atlas Mountains, we will veer off the main road to discover the traditional village of Ait Benhaddou, before continuing to the city of Ouarzazate.

We can have lunch at one of the excellent restaurants overlooking Ait Benhaddou.

After checking into a hotel in Ouarzazate, you’ll have the rest of the evening to explore the town on your own.

Day 2 : Drive from Ouarzazate to Tinghir

Following breakfast, we’ll get back on the road and skirt along the opposite side of the High Atlas Mountains, taking the whole day to explore the region’s fascinating urban and geological beauty in its many the traditional mudbrick towns and beautiful desert landscapes.

Our day’s first stop will be in the Dades Valley, a region famous for its sprawling palm groves growing over an underground river.

Along our way, we’ll visit the famous little town of Kelaat Mgouna, known across Morocco for its traditional Rose Festival in May.

A little further down the road, we’ll discover Soukora, a traditional mudbrick town in heart of 25km² of lush palm groves.

In Tinghir, we’ll turn off the main road to make a stop in the amazing Todra Gorges, where climbers from around the world fight gravity and their fear as they scale vertical cliffs.

Don’t worry—we’ll be exploring this fascinating area horizontally on foot.

We’ll finish our day by checking into a traditional Kasbah hotel deep in the Todra Gorge.

Day 3 : Drive from Tinghir to Merzouga

After leaving our Todra Gorge Kasbah in the morning, we will have the rest of the day to explore the towns on our way to the sprawling desert sands of Merzouga.

Our first stop of the day will be in the small town of Tinejdad, a small picturesque town where you can get a feel for how locals in this region live.

Continuing on our way, you’ll notice how the landscape gets more and more arid, as the temperature gets hotter and hotter, as we make our way away from the mountains and towards the desert.

We’ll pass through the town of Erfoud before reaching the historical town of Rissani, where we’ll get out and explore for an hour or so with a local guide.

After our little tour of Rissani, we’ll drive directly towards the desert to get to Merzouga, one of the last towns before the end of the road and the beginning of the desert. In Merzouga, a camel caravan will be waiting to take us over the sand dunes to our Berber camp deep in the Sahara Desert.

Here your Berber hosts will cook traditional desert meals for you, while teaching you about their culture.

Spend the evening huddled around the campfire, venture out into the desert, or lie on a sand dune and gaze at the stars.

Day 4 : Drive from Merzouga to Zagora

On this day you will have the opportunity to wake up early and catch the beautiful desert sunrise from atop of sand dune. 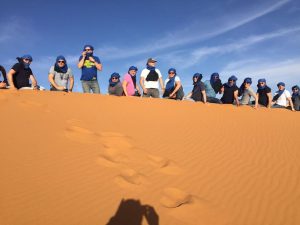 After breakfast, we will hike out of the desert on camelback to reach our van in Merzouga.

After giving you the opportunity to shower and freshen up, we will take another road to get to the other end of the Moroccan Sahara desert, Zagora.

Turning off in Rissani, we will pass through the small traditional villages of Alnif, N’Kob, and Agdz, before arriving in Zagora.

Highlights will include visiting the trilobite fossil center in Alnif and the Tamnaugalt Kasbah in the lush palm grove valleys of the Draa valley.

Following the road along the beautiful and lush palm valleys, we will arrive in Zagora by the end of the afternoon, where we will spend the night in a Kasbah hotel.

Day 5 : Drive from Zagora to Marrakesh

On our last day we will drive you back to your accommodations in Marrakesh following the same road back, visiting whatever extra sites we didn’t have time to visit on our way.