Head north, deep into the Rif Mountains, where the Earth meets the heavens, to explore the enchanting sky blue city of Chefchaouen. 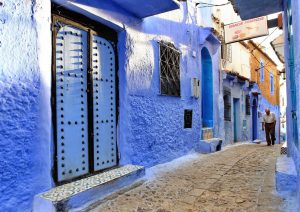 Following an early morning pick up at your hotel in Fez, we will have a 3,5 hour drive up into the Rif Mountains, direct to Chefchaouen.

Once completing your visit, we will drive back to Meknes and drop you off at your accommodations.

You could experience a fascinating night in a mysterious tent with de-luxe furniture and private rooms in the heart of the desert.