Our first stop will be the ruined Roman city of Volubilis. French archeologists began excavating Volubilis in the early 20th century, though half of the immense sight still remains beneath centuries of topsoil.

Still, Meknes’s old city offers a trove of sights for a curious visitor: Moulay Idriss’s massive stables, capacious granary, and cavernous underground prison. We will also visit Moulay Idriss’s mausoleum (one of the only mosques in Morocco open to tourists), the monumental Mansour Gate, the covered food market, and the El Hidem Square.

On the second day of our tour, we will explore Chefchaouen in the morning before heading north to the town of M’diq on the Mediterranean coast in the afternoon. 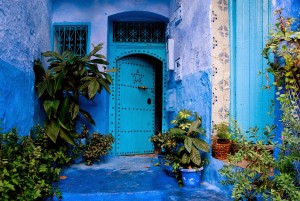 Today, that’s all different: tourists just can’t get enough of Chefchaouen’s innumerable charms. Much calmer and cozier than Fez, Chefchaouen’s most striking feature is, without a doubt, its old city’s picturesque sky blue painted walls and streets built on a mountainside.

Finishing up our visit of Chefchaouen, we will then head north to reach the beach resort town of M’diq on the Mediterranean coast.

On the way, we will make a stop in the pristine coastal town of Oued Laou, where we can spend a number of hours at the beach, if you like.

Continuing our drive along the Mediterranean coastline, we will reach M’diq before nightfall where we will spend the night.

Day 3 : from Chefchaouen to Martil, M’diq, or Marina Samir ( Day at the beach)

The third day of your trip to the Mediterranean, we will spend our time exploring the beach towns along the coast. Martil, M’diq, or Marina Samir, each offers enticing charms to tourists who want to spend a day soaking up the sun and waves.

On the long swaths of beach that line these coastal towns, you can choose from a large number of different activities: sun bathing, wind surfing, scuba diving, swimming, horseback riding, etc.

At the end of this enjoyable day, we will hit the road and reach Tangier by the evening and sleep there.

After greeting you at your hotel in the morning, we will begin our exciting day of exploring Tangier and its surroundings.

First, we will drive out of town to make a stop at the scenic Cape Spartel, where, on a clear day, you may even catch a glimpse of British Gibraltar and the European continent in the distance.

Cape Spartel is one of the northernmost points in Africa—truly where the edges of two worlds meet!

In ancient times, it was thought the lost continent of Atlantis sank into the Atlantic Ocean, not far from Cape Spartel.

In the afternoon, we will return to Tangier, where you will have the rest of the day to explore its historic old medina.

Fez to Volubilis and Meknes

Fez – Volubilis – Meknes – Fez Discover two UNESCO sights in one day: the unearthed Roman city at Volubilis and the Imperial City of Meknes. After a morning pick[ *** ]